When Angel Bumps, Hello From Heaven was first published, I dropped copies off at several churches for their grief groups. I hoped it would help people grieving if they read the stories of signs from Heaven. Once they realized their loved ones are not gone forever, I hoped their grief might lessen.

A few months ago I got a call from Pat who runs the Grief Group at the Pasadena Community Church. She invited me to speak about the book. This was my very first invitation to speak to the public. Needless to say, I was nervous. What if only five people arrived? I’d be embarrassed. Even if seven people came, that’s a small showing.

I invited a few of the local contributors in the book to come along to read their stories. They were excited to participate. I warned them it might not be a big crowd. We arrived at one thirty to set up for the two o’clock meeting. The room Pat chose held sixteen and it was very cozy. We set up until all of other seats were taken and more people were filing in. We took chairs from the library and made a double row with extra seating along the walls. We had a packed house! Some had already purchased Angel Bumps and wanted an autograph.

I was so grateful that God sent all these folks. We had something in common in that room. We’d all lost someone dear to us. Boxes of tissues dotted the table.

We began with a prayer and a blessing from Pat. I asked them to close their eyes while I played the song To Where You Are by Josh Groban. (I encourage you to listen to this song.) There were tears and moist eyes. Tissues were passed.

I told them the story about how lost I felt when my mom died seventeen years ago. I was driving to work when I asked her to let me know she was in Heaven. Within a minute, my car was surrounded by little while butterflies. It was a blizzard of butterflies!

They shared their stories about messages they’d received. It was delightful to hear the different signs. Some people just listened and said it was too hard to speak about loss. We all understood. I quoted a meme I’d found:

“Tears are prayers when we cannot speak. They reach Heaven too.” Heads nodded. We’d all been there.

The two gals who read their stories connected with the audience immediately. Carol told the story of hearing her son, Tony, speak to her after he died. He told her, “Mom, it’s beautiful here.” Even in death he reassured his mom he was okay.

Shannon told the story of mylar balloon traditions in her family. When her son Keith died, his friend put a butterfly balloon on his grave, but popped it by mistake. Within minutes, the balloon flew high for over half an hour, as if it still had air. Keith loved this friend and made sure she knew he was still with her.

One woman was very teary through our time there. Finally she asked, “Why don’t all people receive signs?” She was aching for sign from her parents. I chatted with her afterwards and suggested she ask for a sign. “Make sure you call me when it happens,” I teased her. She grinned and we hugged before she left. I asked my mom to intervene in Heaven and get her a sign real soon.

I hope the people who attended enjoyed the time we spent together.

I know I did. I think God gave me a wink that afternoon. All the worrying I did was taken care of; No worries next time.

I’m looking forward to the next invitation to speak. 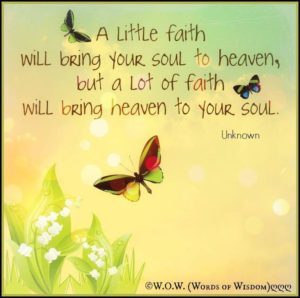 « Sexy at 60 Selfie Snafu
My Husband Is Leaving…Again! »