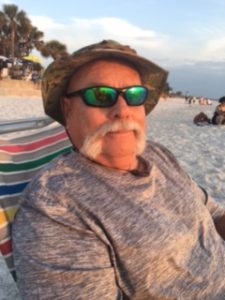 My husband and I have been married for thirty-nine years. My

mother–in–law once told us we laugh too much. And then she frowned

at us. It’s okay. I understood. Pipe down with the happiness! Don’t get

me wrong, we raised five kids, owned a business, and had our share of

We just choose to have a bit of fun.

My husband, Scott had just recently became a Eucharist minister. He gives

Communion at the10:00 mass every week. He is very proud and

honored to do this. I usually sit in the back of the church where he first serves the choir, then comes to my area.

When he walks down the aisle in his flowing white robe, he looks like a big altar boy. He gives me a smile and a wink as he

passes me. I wink back and give him a smooch face.  I love this man!

came along. She was visiting us for a month so we dragged her to the beach.

over and asked Scott to help them with a game.  He said no at first, but she

assured him it was harmless good fun.  Off he went four beach towels over.

chairs set up in a row.  Each chair had a big set of cards with numbers on

women were posing to raise their score.

go with her.  When we explained, she laughed. I leaned in closer and I asked

her to do me a favor.  “Just go over and ask him if’s the one who gave her

communion this morning.”  The three of us were chuckling.  Jamie and I

watched her walk to the judging area.  She tapped Scott on the shoulder and

said, “Should you be doing this? Aren’t you a Eucharistic minister?”  Well he

sat up straight like someone had put a rod up his spine.  His head spun to the

east then to the west.  We can see her chat with him then he scampers back to

our chairs.  “Oh my God! You’re never going to believe this!  Someone

recognized me!  I gave her communion this morning!  This is not good.”  Jamie

said, “Can you believe it?” We both respond “No!  What are the chances of that

To make things even better, my new found actress went for an academy

performance.  He asked, “How did you recognize me?” She says “I recognized

your mustache and broad shoulders.  You look like a football player coming

down the aisle.” I whisper to Jamie that she needs an award for this

performance. He doesn’t know whether to say thank you or run home. Now

you have to know Scott. When we go out dancing, he will engage conversation

with strangers all the time. He usually dances with a few people as well.  So, a

little good behavior check is not always a bad thing.

A friend of ours, Tracey, joined us that day and she played along beautifully.

that too.  “Scott, what were you thinking?”  Jamie is now smirking in her beach

towel.  I just sit with a look of wonderment on my face. “Pass the suntan lotion,

please” I say. “I don’t want to be as red as your father when he burns in hell

for his actions”.  Now we are all rolling laughing.  He doesn’t see any humor in

The next morning he rolls over and says, “I had the worst dream! The

church called me in and fired me.”  I pretend to cough. My chest is jumping in

suppressed laughter. He then proceeded to tell everyone we know what

happened.  He told people at work. He called family up north. He is so upset

with his behavior. I overhear him telling my aunt, “The good news is they also

had Fake and Real signs to grade women’s chest.  I never used them and I gave

“Scott, I’m not sure if that’s really enough to get you into Heaven,” Aunt Helen

told him rather seriously.

Every time I started to tell him the truth Jamie or Tracey would say, “No!No!

It’s too good! We got him. You can’t tell him.”  So I carried my Catholic guilt for

ten days. I knew I had to tell him. When he was going out of town, he said, “I

am having nightmares about that woman on the beach.”  I felt so bad. I ran out

the door after him and I told him he got punked. His face was priceless.

His mouth was wide open, he stepped back three steps and then started

laughing.  “You got me!  I can’t believe you got me! Who else was in on this?

My own daughter knew?!?”   Good thing I told him because he was just getting

ready to call the church to see if there had been any reports on his behavior.

He wanted to plead his innocence.

So yes, we do laugh too much.

« Maverick and Iceman, Top Gun at Four
I Was Deaf To Kim’s Cancer »