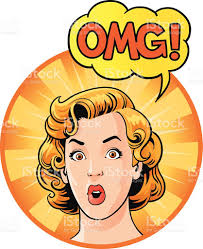 We were at a party last night when a male friend asked if we’d seen the billboard in  Tampa.

“Which one?” I asked curiously.

He looked at his wife and grinned. “They haven’t seen it. Can you tell?”

He went on, “There is a billboard advertising… are you ready for this? Cosmetic Gynecology.” As soon as he said the words, every woman in the room crossed their legs and began having contractions.

Thank God, my mother is in heaven, and she won’t see this billboard. In her house, she never allowed anyone to speak of anything below the belly button and above the thigh. She called that entire region Down Below. She always said it in a deep voice. To this day, when someone says, “Look down below,” I shudder, even though they are talking about their kitchen cabinets.

Now, I am sure there are medical reasons for this surgery; I just don’t like to imagine it. In fact, I’m afraid to check out my Down Below to see if I require such surgery. Lately, I’ve been bombarded with commercials about my sagging eyes, my double chin, and let’s not forget the wrinkles (big and small). I just don’t have the brain cells to add one more thing to my list of needed improvements.

I am concerned that this billboard might cause minivans, Jaguars, and BMWs to drive right off the road and over the bridge.

Imagine you are a woman, driving along. You just lost your job, your kids are in trouble, and your husband is cheating. Then you come upon this billboard, telling you that your Down Below is in need of beautification. What do you do? The Department of Transportation should consider an exit ramp right there, so women can just drive right off into the Gulf of Mexico!

Seriously, what else could possibly need improvement on our bodies? To my knowledge, I don’t believe that a single woman at that party thought they needed cosmetic surgery Down Below.

How does this even come up in conversation?

“Mary, would you like white wine or red? I’ve been meaning to ask you, how is your vagina these days?”

“Oh Jolene, thanks for asking. My husband thinks it needs cosmetic surgery.” Mary should immediately go over, whack Jolene’s husband, and tell him to keep his eyes to himself! That’s what a good girlfriend would do.

I remember when I asked my husband if I should get a facial rejuvenation. He put on his trifocal glasses, shrieked in horror, and reported that I have fur on my face. When I asked about my lines, he asked, “Do you want the big or small line count?” He also mentioned that my eyes looked droopy.

This did not go over well. I hid his glasses the very next day.

Imagine that your boyfriend, husband, or both mention that you might want to consider visiting the cosmetic gynecologist’s office. I would get rid of both of them immediately. For the love of God, it’s not as if we walk around on our hands!

I haven’t seen a single billboard for men to have their Down Below touched up. Sure, they might want to make it bigger―but prettier? Less wrinkled? Men can take that blue pill and all is well in their underwear.

Why can’t women have a pink touch-up pill? Even as I write the words, I wonder what I would touch up?

So ladies, I suggest that you just ignore that billboard. Even though you may have wrinkles―apparently they can be in other places, too―just stay vertical and smile. No one will ever know. We have larger issues to worry about. We are so much more than just a pretty vagina!