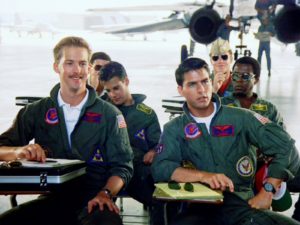 When our son, Justin, was four he decided he needed a gun to shoot rats. I had no idea where he came up with this idea. “We don’t have rats,” I reasoned, “and you don’t need a gun. I’ll buy you a water pistol.”

“No! I need a gun to shoot the rats,” he insisted. I hated when he brought this subject up in line at the supermarket.

“Mom, did you buy me a gun yet? Those rats are getting really big!” People looked horrified that I had this kid living in a rat infested home. I lived in fear that someone would call child protective services. That night, as I tucked him in, I promised I would call the Rat Patrol to take them away. A month later, he was convinced the Rat Patrol did their job and the rats were gone.

His next fascination was with the movie Top Gun. He quoted the movie line by line.  When my husband asked if he had fun at pre-school he replied, “It’s a target rich environment.” Scott looked at me and asked, “Is he Tom Cruise?” He’d be in his room and we’d hear him yell, “I’m hit! I’m hit! Viper, Viper they’re on my tail!”

A few other favorite lines that I heard eight hundred and forty-six times was “I feel the need…the need for speed!”

Often he’d grab the salt shaker/ microphone and break into, “You’ve Lost That Loving Feeling.” With his sunglasses in place, jeans and a white t-shirt he started to look like a miniature Maverick.

Justin really believed he was Maverick and Scott was Iceman. My Mom and Dad came for dinner one night and Justin asked my dad, “Hey Pop, you want to buzz the tower?”

“What tower? How are we going to do that?”

After dessert, he announced sadly, “Goose was a good man. He still is,” referring to sad part in the movie where Goose died after ejecting from the plane. “I’m still sad about that.”

He announced his new goal was to “Go to Top Gun school and be an instructor,” just like Tom Cruise in the movie. Kindergarten would have to wait.

One night I went to bed very early. Around 11:00 I went back downstairs to find Maverick and Iceman, I mean Justin and Scott, watching what else…Top Gun. They were in a rocking chair eating pretzels and ice cream together. I heard Justin ask, “Want to be my wingman? I’ll take Viper’s jet X127N3.”

Scott answered, “Sure. I’ll be your wingman anytime.”   I snuck back to bed.

« Be Still and Listen
My Church Going Husband Got Busted »