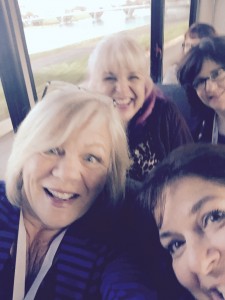 We were at a party last night where all of the women were menopausal. If you ever want to live on the edge, I suggest you host a party just like this. A male friend asked if we’d seen the huge, new, billboard in Tampa.  “Which one?”  I asked curiously. He looked at his wife and grinned. “She haven’t seen it. Can you tell?” She giggled.  It seems there is a billboard promoting …are you ready for this? Cosmetic Gynecology.

The words no sooner rolled off his tongue when every woman in the room crossed their legs and began having contractions. Thank the Lord my mother is in Heaven and will never see this sign.  In Bette’s house there was no mention of anything below the belly button and above our thighs. It was called, “Down Below”. She always said it in a deep, husky voice. To this day when someone says, “Look down below,” I shudder, even though they are talking about their kitchen cabinets. Once on my father-in-law’s cabin cruiser he asked me to get him some bobbers down below, I thought I was going to faint. Then he yelled, “Make it snappy!” I was mopping my brow wondering how in the hell I could make her snappy. I never learned any snap moves.

At the party, the women began to gasp, heat up and one of the women fainted. One woman’s head spun completely around. The words that came from the other two were diabolical. These were good, church going women, but menopause had turned them into crotch saving patriots.
The men got scared and ran into the kitchen.

Now I am sure there are medical reasons for this surgery. I just don’t like to imagine it. In fact, I’m afraid to check out my “Down Below” to see if I require such surgery. Lately I’ve been so bombarded with commercials on my sagging eyes, double chin and let’s not forget the wrinkles (big and small), I just don’t have the brain capacity to add one more thing to my need to improve list.

I am concerned that this billboard might cause women driving minivans, Jaguars and BMW’s to drive right off the road and over the Skyway Bridge.  Just imagine you lost your job, the principal called to expel your kids, your husband is cheating and now you come upon this sign. They ought to consider an exit ramp right there to let women just drive right off into the Gulf of Mexico! Seriously, what else can need improving on our bodies? I don’t believe to my knowledge that a single woman at the party thought they needed cosmetics in that area. Then again, we are forgetful during our charmed, menopausal years and we all need glasses.

How does this even come up in conversation? “Mary, would you like white wine or red? I’ve been meaning to ask you, “How is your vagina tonight?” “Oh Jolene, thanks for asking. My husband thinks it needs a beauty treatment.” Mary should immediately go over and whack Jolene’s husband and tell him to keep his eyes to himself! That’s what a good girlfriend would do.

Now imagine your boyfriend, husband or both mentions that you might want to consider visiting the cosmetic gynecologist office. I would dump of both of them immediately.  For the love of God, it’s not like this area is exposed to the world unless you are a naked gymnast doing cartwheels down the street.

I haven’t seen a single billboard for men to have their privates touched up. They just want to make it bigger! They can take that blue pill and all is well in their boxers. Why can’t women have a pink touch- up pill? Even as I write that I’m wondering what would I touch up?

And so ladies, I suggest you just ignore that billboard. Even though you may have wrinkles (apparently they can be in other places too) just keep your clothes on, stay vertical, smile and no one will ever know.  We have larger issues to worry about. We are so much more than just a pretty down below!

And right after those hot flashes start to slow down, your vagina is going to dry up like the Sahara Desert. Save your energy and money. You’re going to have to spend some money buying lubricants in bulk at Costco. I’ll see you there!

« Man Oh Man….This Menopause!
Nipples On My Knees and Other Joys of Menopause »