After two weeks of having the cold/ flu that was due to end any minute, I finally gave in and made a doctor’s appointment. I’d been coughing, sniffling, sweating, and sleeping non-stop.

It was only a matter of time until I got bed sores from all the time I spent in bed watching Hallmark movies and the news. I admit the news is not the best choice for a sick soul. The Hallmark movies made me so sentimental, I shed a tear and fall asleep.

When I arrived at the doctor’s office and found a seat, the TV was quietly giving the news once again. I’d had two weeks of political issues, accidents and disasters. It just made me feel worse. I looked around the office for a different distraction. The usual magazines were lined up neatly, but I figured they’d been touched by germ filled people like me, so I passed. That’s when I noticed the salt water aquarium in the corner of the room. 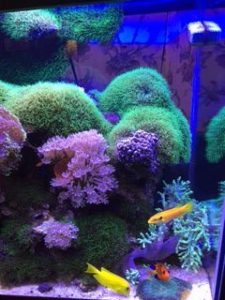 I’d been to this doctor many times over the years yet, I never took the time to actually look at the aquarium. The tank was probably about a hundred gallons and held only four tropical fish. Their colors were striking: bright yellow and blue, a sun orange and white Nemo fish, a long orange striped fish who was intent on breaking through the holes in the moving wall of greenery. The last one was on a mission, as well. He must have been on security duty as he circled the perimeter as if on a mission. His blue speckled body flashed by in a rush. What amazed me after taking in the beauty of their colors was that something else was moving in the tank.

As I tried to capture photos of the plants, the fish photo-bombed my efforts.

The plants were alive! I stared at their movements. There appeared to be a mini-mountain of greenery, yet it swayed slowly. Pale lavender plants, shaped like a daisy, with bright blue centers waved in front for contrast. On the left wall, a thin spiny gray looking branched also swayed. Everything in the tank was alive! 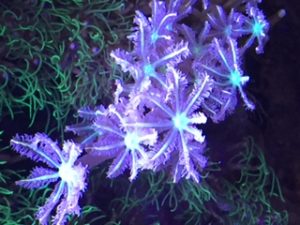 I was mesmerized! I stuffed a tissue up my nose so I could continue the experience. Just to the right a neon green and purple plant did a slow dance to the rhythm of the water. It was definitely a cure for my weary mind. I felt my shoulders drop as I took deep breaths in tune to the plants movement. To think that if I hadn’t stepped away from the news, I would have missed this completely.

The thought struck me, “What else have I been missing?”

When they called me into the exam room, my step was a little lighter. My head was clearer. I’d just been given a massage for my soul.

I think I’ll go visit the doctor more often, but just enjoy the aquarium. The best part is there’s no co-pay required.

I see a salt water aquarium in my future.

« Chardonnay in Aisle Sixteen ….and a Steer Named Elvis
Heaven, Can I Speak To My Mom, Please »