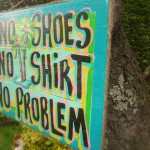 No Shoes, No Shirt, No Problem

My father-in-law, Pop, moved into an assisted living facility three minutes from our home after his wife passed away. I’d known him for over thirty years and yet I didn’t realize what a sweet man he really was. My mother-in-law kept him in the background. He was a quiet, gentle, religious man with bright blue eyes and an engaging smile. He was a kind man who liked tea “with two sugars and an ice cube, please”….always please. She isolated his friends and his children after they were married and tended to be very jealous. He kept the peace and never rocked the boat.

Pop was a World War II veteran. He went to our local VA hospital at Bay Pines for all his doctor visits. My husband, Scott, was usually his driver, but this day I was his co-pilot. I loaded up the usual: wheelchair, oxygen, blue tote bag filled with juice and crackers. We were five minutes into our ten minute ride when one of my favorite songs came on the radio. Kenny Chesney was singing, “No Shoes, No Shirt, No Problem”. I turned up the radio up and sang along, snapping my fingers. Pop just laughed. I told him he could learn the chorus and next time Scott drove him, I’d put that CD in he could shock him by singing along. We laughed as he practiced the lyrics. By the time we drove over the bay, he had the chorus down and we sang it together. We were giddy imagining Scott’s reaction.

Pop was very concerned about his family being fractioned. After my mother-in-law passed away, he began to mend things. He apologized and wished he’d been stronger. Slowly fences were mended joyfully. Pop’s oldest son had a family rift with his only son. It happened years ago, but it splintered their connection. Pop prayed and prayed that they’d make amends. He asked me to get his grandson’s phone number and call him.

“Pop, I think it would mean more if you called him,” I told him.
“No, this is better coming from a woman.” he insisted.
I clucked at him and called him a big chicken.
I made the call and left the message that Pop asked me to relay.
We waited a few days and still no reply. Pop asked me to call again. I left another voice mail.

After Pop passed away, I was driving to the VA Hospital to volunteer. I was really missing Pop that day. He’d been such a huge part of our daily life. He’d call every morning and ask what was on the agenda for the day (translation: any doctor’s appointments today?) He got involved in activities at his ALF: Wii bowling, cooking classes, sing a-longs, fishing, and mass. He always made mass. Every meal was an event that brought more stories to tell. Any women who were interested in him, he quickly made it clear that they could be friends, nothing more.

I was crossing the bridge where Pop had perfected his “No Shoes, No Shirt, No Problem” chorus when the song came on the radio. I cried and sang along and when it came time for his chorus, I leaned my hand over to the shotgun seat as if to say, “Take it away, Pop.” I swear I could feel him with me.
That was two years ago. A month ago, I saw a post on Facebook that Pop’s grandson reached out to a friend and made a phone call. I sent him a note asking, “Was it with you know who?” and he replied, “Yes it was! So happy I did it.”

I was so happy I cried. I wish Pop was here to see it. I knew he was smiling in Heaven. I was still smiling when I got in the car. I turned on the radio and I must have left the volume on high because “No Shoes, No Shirt, No Problem” came blasting on the radio. I smiled, cried and had goosebumps.
His prayers were finally answered. No Problems!
I love these messages!