I was visiting my oldest daughter, Erika, and my grandkids when my selfie fiasco took place. I’d had two glasses of wine before bedtime to relax from all the excitement of the day. I blame the wine for what happened next.

I was thinking about an ad I had seen where a husband is going away and his young daughters have colored paintings for Daddy. Mommy has her own special gift and sneaks something for Daddy to watch later. She winks and smiles. He looks confused, but then he smiles, as his eyebrows raise, understanding the gift this time. I thought how far technology has come where you could send something special with your phone.

So when my daughter went to bed I sat, sipping my wine, thinking about that commercial. I decided I was going to send my husband a sexy photo of myself.

I giggled with excitement as I headed to the bathroom. I lifted up my top to expose my bodacious ta-tas (that had to be the wine talking) then I smiled at my reflection and SNAP! I took the picture. It was much too serious. It wasn’t as fun as I’d planned. So I hiked up my shirt again, gave my best sexy smile, took a sip of wine and SNAP! Once again, not the look I envisioned. I gulped more wine and practiced seducing looks in the mirror. I may have purred. 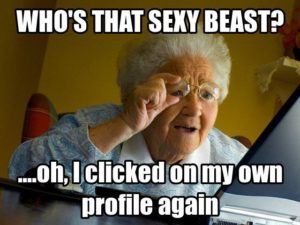 My alabaster belly gave me an anemic look. I found some blush in the bathroom and swept pink glow around my belly. When I saw it in the camera, it looked like I had the measles. This was becoming a real “not so fun” project now.

I’d heard from friends after fifty the camera is much kinder if you look up into the lens. I decided to try that. Again, my bodacious ta-tas were bared as I cooed for the camera and SNAP! This one passed the test. I sent him the pic. “You are one sexy lady, Anne!” I told myself smiling in the mirror. “Cheers, Baby!”

The next morning my husband called. He didn’t mention my beautiful sexy pic so I asked him if he liked it. “What picture?” he asked seriously.

“My beautiful sexy pic I sent you last night,” I responded quietly so my daughter wouldn’t hear me.

“Come on, check your phone. I sent it at midnight. Go look.”

He got back on the phone….”No pic,” he informed me.

Oh no! Where did I send it? I should have known better. I have not mastered all of the gizmos on my phone. In fact, we are enemies. All sorts of apps open and close, my ringer changes, Bluetooth goes on when it feels like it. I don’t even have a Bluetooth.  Now I was in a panic. Mental note to self: DO NOT mix wine and the phone, much less the camera again.

I was hoping I didn’t get the numbers confused (like that ever happens to me! Only weekly!) and sent it to my son. Their phone numbers are very close. “OMG you have to call him! NO! Don’t call him, he’ll look at his phone and he might see the message,” I rambled to my husband. “Go over to his house immediately,” I begged. Beads of sweat were forming all over my body.

Matters got worse. I had to ask my daughter if she could figure out where the pic got sent. “Ummmm Erika, I kind of had fun last night and “just for fun” I sent Dad a pic of myself…like in that commercial.” I started slowly.

“What commercial?” she asked. I explained

When she got the gist of it she shrieked and screamed, “Mom, what did you do???”

“Well, it’s not so bad, really. I just took a bodacious ta-ta selfie and sent it to your father, for fun. You know, just for fun.”

“Well, there’s a smidge of a problem. It didn’t get to him. Can you look at my phone and see who I sent it to?” I begged. I tried to remain calm and not let my fear show.

She looked horrified. “What? You didn’t put it on Facebook did you?”

I assured her, “Of course not, but I’d taken my glasses off when I was cooing. I was sipping wine and having so much selfie fun, who knows where I sent it.”

“Cooing? You were cooing? In my bathroom at midnight?!?” She rolled her eyes like I was an unfit mother. “It was just for fun,” I repeated.

I jumped in the shower while she searched my phone. I prayed to St Anthony, the patron saint of lost things. I don’t know if he finds “just for fun naughty things” but I was desperate. When I came out my daughter was on speaker phone with her sister. I heard them talking about my selfie.

“She did what????  OMG they’re too old for this!” my younger daughter, Jamie, shrieked.

“It gets worse. Did she send it to you?” Erika inquired. “Oh and mom coos.” She added.

“She calls them her bodacious ta-tas now, not boobs.”  Jamie choked.

My three year old granddaughter liked that word. She pranced around the room singing ta-tas over and over again.

“Look,” I yelled, “Just make sure your brothers didn’t get it, okay? And you better check Facebook!”

We never did find out where my beautiful sexy pic went. Someone probably got it and buried it in the yard, like a real treasure.

I am a treasure, you know. A bare chested, bodacious, cooing treasure! Yes I am! Anybody want a glass of wine? I can teach you how to coo like a professional.

Let’s not mention this to my daughters.