We have a coveted half bag of Cheetos hidden in my living room. It’s covered with an assortment of eight accent pillows: a blue seahorse, a multi-colored peacock, a bright seashell, a photo pillow of my granddaughters on the beach, a striped pillow with tassels, and an assortment of pastel beachy tones. The Cheetos are at the very bottom of this pile for safe keeping. You see, we have a Cheetos bandit in our house and his name is Pop. My four year-old grandson, Arlo, is the keeper of the Cheetos bag.

This bag has lasted three whole days. That in itself is amazing. But when you consider the trauma it has seen, it’s just unbelievable that it has not turned into Cheetos dust. It has been tosses across the room, stuffed in hiding places, and bounced as he ran through the house fleeing Pop’s chases. This bag of Cheetos deserves an award.

Last night as we prepared to leave the beach, in two separate cars, my husband said, “Arlo, I’m going to get home first and eat all of the Cheetos.” This brought a scream and look of pure horror. Pop jumped in his car and there was a race to see who would arrive home first. “Smoke him! He’s too fast!” came the screams from the back seat. That darn Pop drove like an Indy 500 driver. He blocked us from passing him. Who knew he had such skills?

We arrived home first, only because my daughter inherited her father’s driving skills. Arlo sprang from his car seat to reach the beloved bag of Cheetos first. He threw the pillows in all different directions and stood proudly with the orange bag in hand as Pop came through the door. Arlo gave a ghoulish laugh. “Bwahahaha! I beat you! They are all mine now.” 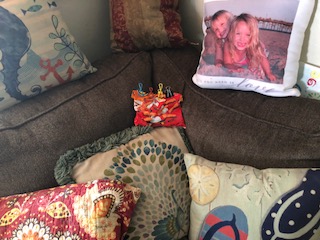 He held the bag proudly in the air and that’s when I noticed there were four clips on the bag. “Arlo, you only need one clip to keep the Cheetos fresh,” I said.

One by one, he unclipped them. He carefully placed them on the coffee table for future use. “I know. But I need four to keep Pop out, “he said seriously, munching on a long thin Cheetos.

And that’s when the Cheetos Bandit struck from behind. He quickly snatched the bag from Arlo’s grips and ran off into the bedroom laughing. “Nooooooooo!” he screamed as he chased the bandit. “You are an adult. I am just a kid. Get your own Cheetos, Pop.”

While Scott and Arlo carried on, River was hiding behind his cousin’s pink sunglasses crunching Cheetos. You see, the sunglasses made him invisible!

On todays’ agenda we have Cheetos shopping; One bag for each person in the house.

Miss Mattie, our dog, may even get one. Our entire family will have orange fingers and wear big smiles for the rest of the day. Cheetos rock!

I better add clips to our list. We want fresh Cheetos. After all, a bandit still lives in our midst.

« God Is Weaving a Tapestry
The Wisdom Mole Hair »