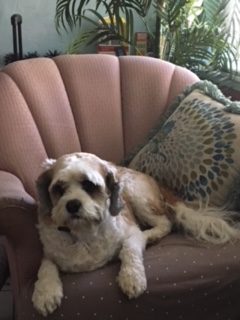 I didn’t really want another dog, but our other Cocker-poodle mix was lonely after our other dog passed away. I talked myself in and out of getting another pet for weeks. I visited pet shelters, checked rescues and sure enough not a single dog called to me. I decided then and there God was telling me I had enough on my plate. I was not getting an other dog. That was final.

St Francis must have been paying attention to this whole scene because the morning after my final decision, who did I find but a sweet Cocker-Cavalier Spaniel mix. I must have left the Craigslist open and there he was. He was sitting on a chair and I think I heard him say, “Come get me.” I’m sure that’s what he said.

When I made arrangements to visit I told myself it was not a good idea. There was barking when I knocked. Oh! I did not like that yappy bark already. When the woman opened the door, I realized it was a small dog in her arms making all the racket. My interest was in the pup staring up at me. She warned me that he was very shy and it would take a few minutes for him to warm up. I sat on the couch and he pounced onto my lap and nuzzled into my neck. “This is shy?” I asked. “I swear this has never happened before,” she said laughing at his antics.

I thought she was schmoozing me, but when her husband came home and found the dog in my lap he was shocked. “What is going on? He never does this!!” By then he was nudging my hand to continue petting him. That’s when I knew I had heard right. He did say, “Come get me.”

His name was Wilfred. His elder owner had to go into a nursing home and he was shuffled between her caregivers and friends until I arrived. Wilfred? Who names a dog Wilfred? I thought I’d just change his name.

Well Wilfred stayed Wilfred for the seven months that we had him. In those short months, he snuggled into my heart and became my all-time favorite dog. He had a lot of competition. He was my shadow and buddy. I think one day I heard him say, “I really don’t want to go out on the front porch. It’s too hot, but if you’re going, I’m going.” At four a.m. he’d follow me to my writing room and sleep near my feet.

He loved my convertible! He loved walks and treats. He especially loved when the grand kids came to visit. He got so much love and they dropped so many snacks.

Then he got sick. He had an aggressive tumor that gave us just two more weeks once he was diagnosed. During those two weeks, he was hugged and smooched, fed treats galore and loved on. He chased the little ones for cookies and snuggles. He didn’t act like he was going to die soon.

He was still arranging the pillows on the couch to get closer to me. He still followed me to my writing room and snored at my feet. Our vet told us to enjoy him and when it was time to let him go, we’d know. And we did at 2 a.m. one morning. We took my convertible and he sat in the back seat. I could not stop my tears. I loved this dog more than I thought possible.

When we got home I sat at my desk and bawled. This pup was an angel in my life. He must have been that I felt such love for him. I missed him already. Suddenly a Guidepost magazine that I’d subscribed to fell off my desk. When I bent to retrieve it, it was open to this page.

I laughed then I cried even more. “Wilfred, you made it to Heaven. I miss you too.” 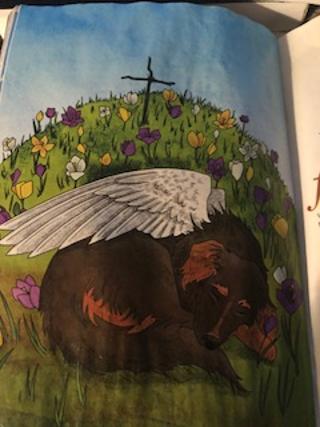 The following day the name Wilfred came up three times: Wilfred University, Wilfred Lane, and a man with last name of Wilfred.

I see an Angel Bumps, Paw Prints From Heaven coming very soon. Call for Submission is open. If you’d received a sign from your pet send it to me.

It could be a jingle of their collar, feeling their presence, their favorite toys arriving. Send to: myangelbumps@gmail.com  1500 words

Needless to say, the book will be dedicated to Wilfred.