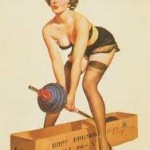 I just found out that for the bulk of my life, I have been exercising the wrong muscles. I want to lay on the floor, kick, scream and throw a tantrum. Years of leg lifts, squats, and miles walked on the treadmill, all for naught. I just flipped through the new catalog of Self Care Products for Women and there it was—just in time for my birthday—a vaginal weight set!

The depressing part is that now, in addition to my thighs, buttocks, triceps, and biceps; I have to worry about my hidden parts. I seriously thought they were in great shape. I think I may have even bragged about them at a party after a few glasses of wine. Why did I ever open that catalog?

In my family, we never discussed anything below the naval and above the knees. When my dad learned that my aunt was having surgery on her uterus, he asked her if that was close to her Sagittarius. My mother never mentioned that my sisters and I needed to do Kegels or lift weights with our vaginas. When I was growing up, no one had ever even whispered the actual names of sexual organs at 245 Willow Avenue.

Now, there it was in plain print; the word vaginal!

Women didn’t have to concern themselves with this stuff in the old days. Just once, I’d like to open the Sunday paper’s fashion section and read, “Scarlett O’Hara hoop dresses are back this season.” Oh! I would be such a happy lady! Imagine not having to suck in my stomach, tuck in my derriere, or lift those damned vaginal weights. The hoop dress would hide everything below my waist. Actually, I might need to invest in a corset for above my waist.

The only requirement to look good in a hoop dress is a full bust, and every woman knows that if you just gain a few pounds, your bust increases. With the scooped neckline so low, my husband wouldn’t even notice if I had a double chin. I doubt he’d even notice I had a face!

So now, in addition to working, cooking, cleaning, carpooling, and my mending (I just slipped that in for Scarlett), I have to tend to more body parts. The ad-men had struck again; it’s just one more reminder that I’m not good enough just as I am.

The set only costs $125 and includes a leather carrying case. I envisioned the old, “Don’t leave home without it,” commercials for American Express. The ad also offered me free shipping if I ordered an extra set for a friend. I guess they don’t realize that I wouldn’t have a friend left in the world if I started giving vaginal weight sets as gifts.

The ad assures me that I’ll be less embarrassed, more confident, and have more control over my life. They swear that the weights are foolproof.

I think I’d be more embarrassed and less confident if I didn’t already exercise my self-control and profess that I, too, am foolproof. Who would ever think that a bodybuilding strong vagina could make such a difference in a woman’s life?

As Rhett Butler said, “Frankly, my dear, I don’t give a damn!”