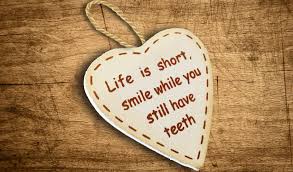 We were both early for our eight a.m. blood work. I sat next to an elderly woman on a bench in the waiting area in the atrium. I smiled and said, “Good morning.” She returned a hello with a heavy Maine accent. I learned her name was Ruth. She was about five-foot-two, with short gray hair and a pleasant smile. She looked like she could be my neighbor.

“I have this medic alert,” she told me as she pulled it out for me to see. “It’s a great thing, I guess. But if I fall holding a grandchild, that doesn’t help the baby much.” We still had ten minutes before the doctor’s office opened. She told me she and her husband had been married for over sixty years. He passed away two years ago, when she was only eighty-five.

“Are you dating again?” I asked, kidding her. She burst out in a belly laugh. “Dating! Oh my God, dear, No! I’d never find another man like my husband. My sixty-year old son-in-law picked me up for this appointment this morning and a neighbor asked if he was picking me up or was he just leaving?” She giggled and I howled with laughter.

The office door opened and we filed in. By now two gentlemen had joined us. We learned they were both in the Marine Corps. One was in the Korean war. We both thanked them for their service as the same time.  Ruth patted the Korean vet on the arm. He acknowledged her pat with a kind smile.

“Sixteen! Dear Lord! The woman never had time for a bubble bath!” I don’t know why               that seemed relevant. I guess just imagining sixteen kids, I felt the need to lock myself in the bathroom!

We laughed at the memories of having little ones and then the teenager years. “I screamed a lot during those years,” she confided.

Ruth was called for her lab work. I was called right after her. We were across the aisle from each other.  I popped across the aisle and invited her for dinner one night. She told me, “I don’t go out much. I don’t have friends. I used to watch all the great grand kids, but not anymore.”

I haven’t heard from Ruth yet, but it’s only been a few days. I’ll ask our doctor’s office to pass along a message to her.

I’m pretty sure we’re going to be more than “almost” friends.