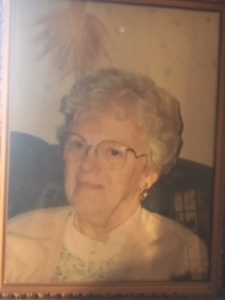 My mom had a favorite story that seemed to fit every occasion. She reminisced about a time  her co-worker’s only son played baseball. Georgie was ten years-old. He was not athletic and usually struck out, but this one glorious Saturday morning day, Georgie sailed the ball clear into the outfield. It was a miracle! The crowd cheered while Georgie stood in place in shock wit his mouth open and the bat dangling. The coach yelled, “Georgie, run the bases!” Georgie darted off to first base. Along beside him was his mother, Agnes, screeching,” Run, Georgie, run!” She ran all the way to third base with him, almost colliding with the short stop who had fielded the ball, but dropped it twice.

I have heard this story at birthday parties, anniversaries, weddings and even over Sunday dinners. It’s a story that fits all occasions.

Birthday: When anyone blows out their birthday candles, it reminded my mom of Agnes running out of breath by the time she got to first base.

Anniversary: When a guest toasts the couple, they usually mention how they supported each other over the years, which prompted my mom to pipe in, “Did I ever tell you about Georgie’s mom?”

Sunday dinner: It took approximately five minutes as we sipped our coffee and enjoyed our dessert before mom could find something that related to the Georgie story. Once it was that I put too much sugar in her mug and it was so sweet, it took her right back to Georgie and Agnes.

I never had the heart to tell her I’d heard that story eight hundred and twenty six times. I listened each time and smiled.

Now that I am sixty five, I am repeating my mom’s story telling. I haven’t mentioned Georgie yet (I don’t think). My family doesn’t just listen sweetly and smile.

My husband: “You told me that four times already.”

My daughter: “You told me that yesterday.”

Other daughter: Finished my story for me. “Where did you hear it?” I asked.

“Where or when? I’ve heard it about six times when we visited last.”

I am always shocked when this happens.

I am quite the story teller. I embellish the details to enrich the story. I laugh when I tell my stories, like it’s the first time I’ve ever told them. Even my friends started saying, “You told me about that.”

I may have to carry a small notepad in my purse and start keeping track of who hears my stories. I don’t want to be one of those “repeaters” who say the same thing over and over. I want to be energetic and entertaining …….

“This reminds me of my mom’s co-worker, Agnes. Her ten year old son played baseball……..”

Mom is in Heaven now. I think she and Agnes might be at batting practice. She’s probably reminding Agnes of the time Georgie hit that triple and she ran the bases with him, screaming the entire run.

What I wouldn’t give to hear Mom tell that story just one more time.

« The Hula Hoop Method
The Circle of Life »