I’m happy to promote my dear Erma Bombeck friend, Stacey Gustafson. Her (2nd edition) Are You Kidding Still Kidding Me? is hilarious. Stacey is a mom, a wife, a humor writer. I love the stories about her Mom. She can’t get Siri to turn on her oven either. I think we might be related.

Here’s a sample chapter. Enjoy and share with your friends, please.

I Netflix Cheated on My Husband 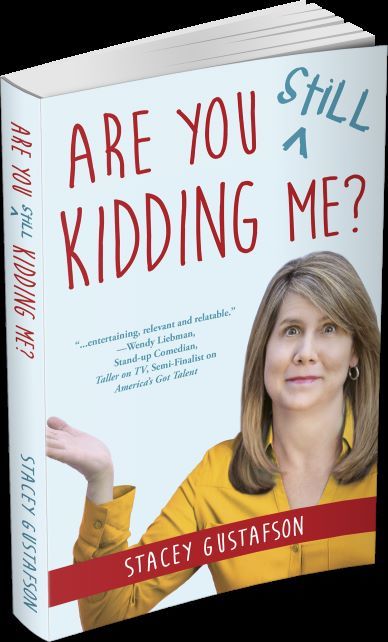 I tried ways to end my deception, but nothing worked. To protect my indiscretion, I routinely deleted my Internet browser history, shredded phone bills and swore my friends to secrecy. I Netflix cheated on my husband.

How did this begin you ask? I blame it on the old-fashioned dinner-and-a-movie routine. Our choices had boiled down to The Lego Batman Movie and Fifty Shades Darker. Why were we wasting our money on this crap? So, we traded a night out for a night in.

It all started so innocently.

Cable television options are limitless. Netflix, Amazon Prime, Hulu, HBO Now, the list goes on. No need to go to the theater when you can indulge in more than fifty hours, or five seasons of thirteen episodes. Intriguing shows like Shooter, Stranger Things, Dexter, It’s Always Sunny in Philadelphia, and House of Cards sucked us in faster than a fur ball to a Dust Buster.

Netflix, where’ve you been my whole life?

We clicked through cable channels and realized we’d only scraped the surface of the Netflix barrel.

On Saturday night, we trolled the channels and found The Killing, a crime drama based in Seattle, featuring homicide detective Sarah Linden and her sidekick, Holder. It had more red herrings than a fish farm, and we were addicted by the first hour.

“No can do,” said my husband, shaking his head. “Got to get up early.”

“Come on,” I said, batting my eyelashes. “Please.”

By Sunday evening, we squeezed in Episodes Five and Six.

“Got to call it quits now,” he said, rubbing his eyes and giving me a glassy stare. “Up for work by six.”

“Okay,” I said, fidgeting on the sofa. “I’m going stay up a little and read. Night.”

“No cheating. We agreed to watch this together.”

The glow of the television beckoned. What would it hurt? I slammed shut The Girl on the Train and clicked on Episode Seven. I snuggled into my soft throw blanket, popped a can of Coke and let the drama begin. Heck, I’d rewatch it the next time we were together. He’d never know. But I knew I’d crossed the line.

I had become a Netflix cheater.

After he left for work the next day, I thought, “What would it hurt to take a little peek?”

“Can you pick up some milk and…um…um…pimentos?”

He’ll be searching for hours.

I needed to buy some time to finish Season One. I couldn’t stand not knowing what was happening. Would they catch the real killer? What’s that new evidence they keep talking about?

Suddenly, I detected the slow hum of the garage door. How the hell did he find the damn pimentos that fast? With a loud bang, the door clanged shut on the concrete floor. I hit “off” on the remote.

He strolled into the room, and his green eyes scrutinized the screen.

“Were you watching The Killing?”

“No way. We promised to watch together.”

“Where did we leave off anyway?” he said, trying to trip me up with probing questions. He clicked on the three-way light on the end table next to me.

What is this Guantanamo?

“I think it’s the one where they discover that kid in the teacher’s apartment,” I said, wiping my sweaty hands on my pants.

“Um, I’m not sure,” I said, as I leaned in and heard the distinct drip of the kitchen faucet. My armpits sweated more than a hot flash.

“Did you watch more episodes?” he said, eyebrows pinched together, as he squeezed in between the arm of the sofa and my body until our thighs touched. “You can trust me. I won’t get mad.”

Seriously, dude, you’ve been out of town so much I had to get my fix.

“Promise not to watch anymore?” he said, cocking his head to one side.

I vowed to keep my promise, turned on the television and started scrolling for something else to watch. We’d considered binging on Shooter after watching the previews on Netflix, a drama series based on a former military sniper called back into action to prevent a plot to kill the President.

But when I clicked on it, I noticed that the red bar underneath, the one that indicated if it had been recently viewed, had disappeared.

What?! Holy cow, he’s Netflix cheated on me!

I lost all sense of remorse and settled in for hours of binging on Shooter. Two can play this game.

Stacey Gustafson is the bestselling author of Are You Kidding Me? My Life With an Extremely Loud Family, Bathroom Calamities, and Crazy Relatives, ranked #1 Amazon in Parenting & Family Humor and Motherhood. She released her second book in the series, Are You Still Kidding Me?, on September 18, 2018. She’s also an inspirational speaker, blogger and comedian. Her short stories have appeared in Chicken Soup for the Soul, seven books in the Not Your Mother’s Book series, as well as Midlife Boulevard, Erma Bombeck Writers’ Workshop, Pleasanton Patch, Bay Woof, and Better After 50. She writes the blog, Are You Kidding Me?, where she dispenses her humorous take on kids, husbands, parents and everything in between.

She has been featured in The Monthly, East Bay’s Premier Magazine of Culture and Commerce as “The New Erma Bombeck,” The East Bay Times, and Toastmasters Magazine.

She lives in Pleasanton, CA with her college sweetheart, Mike, and a white furball named Stanley who loves peanut butter treats. Visit her popular blog at StaceyGustafson.com and Twitter @RUKiddingStacey.