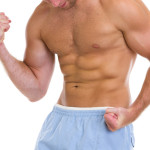 This is the best and worst thing that has ever happened in our marriage. My husband lost forty five pounds. I did not.
I am the one who is always trying drop that old baby weight from my last child. He’s thirty now and I think the weight has just attached itself to me. I can’t shake it off. Scott, on the other hand, has a fascinating weight loss program that will never work for me. He only eats when he’s hungry. And worst yet, he eats what he feels like. This horrifies me.

For dinner last night, he ate mixed berry pie with a scoop of homemade vanilla ice cream (homemade, but not by me). He considers this a fruit and dairy healthy dinner. I actually taught him that during my food group disaster diet. I told him I only ate ice cream to prevent osteoporosis and he was so concerned he served me double scoops. I love that man!

Now he only eats two meals a day, but he munches on sweets all day. It is just wrong that he should lose weight. The other day he came home all excited. “Guess what?” he said, “There are new krispy treats with chocolate chips and they’re covered in chocolate.” My hips immediately gyrated. Unless it was ninety eight percent dark cocoa, I couldn’t imagine how I’d have one of those babies. After all Scott was forty three pounds ahead of me.

I decided my best bet was to fatten him up. It has been a battle. The man isn’t hungry. If I don’t eat something by nine o’clock, I am shaking. Shaking, as opposed to gyrating. I need food! I’m going to attempt a crash course in his way of eating.
Breakfast: 2 cups of coffee with cream and sugar (no sweetener) and a half of cinnamon bun, heated.
Mid morning: an egg on a fiber muffin (this was my idea)
Lunch: a turkey burger, no roll, no chips.
3 P.M. snack: hard candy
Dinner: pie and ice cream
Snack: pretzels and few chips

I am shaking just writing that menu. When I discuss it being an unhealthy diet, he distracts me by showing me his new jeans. He has shrunk five sizes. He looks like a brand new person. I still look like the old Anne. Maybe I’m just jealous, but if he poses one more time to show off his new physique I am going to eat all of his pretzels, chips, pie and ice cream!!

« The Damn Budget
Where’s My Butler? »