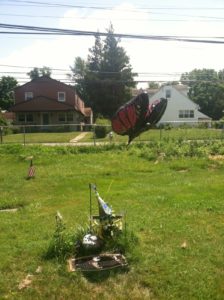 Here’s a chapter from
Angel Bumps, Hello From Heaven

In our cozy Pennsylvania neighborhood, we had a tradition of tying Mylar balloons to our mailboxes to announce special occasions: occasions like births, christenings, First Holy Communions, confirmations, bar mitzvahs, bat mitzvahs and holiday parties.

Our son Keith, and our neighbor’s daughter Courtney, were born just a week apart. Courtney was a beautiful baby and the center of her parent’s world. She was Daddy’s girl from the moment she was born. He beamed with pride just thinking about her. Pink Mylar balloons flew from her parent’s mailbox when she came into the world.

When our son, Keith, was born, it was our turn to beam. He was also a beautiful baby, and he brought so much joy to us, as well as to his three older brothers. He was the baby of the family and they never let him forget that. Blue Mylar balloons flew from our mailbox when Keith came into the world.

Our families became inseparable and intertwined. Keith and Courtney walked to school together, and entered the classroom hand in hand. When she was scared, he stayed with her and calmed her.

Life was so pure for the, until the shadow of death entered the neighborhood.

Courtney was only seven when my husband had to tell her the sad news, because her mom couldn’t say the words. “Sweetie, he said softly, “God called your daddy back to His house today. He’ll be with God from now on.”

It was heartbreaking to watch the two of them hug and sob. Keith, his brothers, and I cried with them. Seven years old is too young to lose a daddy.

Years later, Courtney and her mother moved to Connecticut. She and Keith kept in touch- they wrote letters, talked on the phone, and nurtured their friendship. They graduated from college, followed their passions, and stayed connected through Facebook. Keith remained in Florida after college, and Courtney stayed in Connecticut.

On March 19, 2013, Courtney had to hear the yet another person she loved had been called back to Heaven. At age twenty-four, just five days shy of his twenty-fifth birthday, our son Keith was killed in a motorcycle accident. He’d been coming home from a golf course, where his dreams of becoming a club pro were just beginning to be cultivated.

Courtney shared this text with me after her visit to Keith’s grave site: “As I went to place the balloon on Keith’s grave, I accidentally popped it. It made a “pop” noise, and within a minute it was completely out of air. And yet, one minute after that- it was flying throughout the air for an entire half an hour. It watched it soar as if nothing had happened to it. So bizarre!”

Courtney ran to her car to grab her phone, so she could capture this bizarre event for me.

Mylar balloons are known to withstand heat, cold, rain and storms. They are long-lasting. I like to think this was Keith’s way of telling Courtney that he’d be with her throughout all the storms in her life, and that he’d never leave her side. The balloon she bought for him was like the ones that flew on our mailboxes when they were born to celebrate their arrivals. And now, once more, he flew a balloon for her to announce that he’d arrived in Heaven.

The organization, Compassionate Friends-a bereavement organization for parents that have suffered the loss of a child- uses the butterfly as their symbol. A counselor told Courtney that the Holy Spirit, with the breath of His angels, had sent a sign of compassion to her to explain to her that Keith friendship will continue to soar in the spiritual world, for ever.