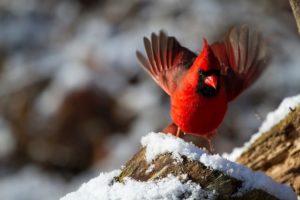 On Christmas Day Alexis presented ten family members with a copy of Angel Bumps. The books were all unwrapped at the same time. They had no idea that her story, The Cardinal Bump, was in the book. Her son, Connor, who is the subject of the story, made cardinal bookmarks. Alexis laminated them and Connor placed one in each book on page 172.

Tears and joy filled the room. I’m sure Pop-Pop enjoyed the festivities too.

I give you her story.

My grandfather, Pop-Pop, passed away when I was sixteen years old. He was my only living grandfather, and my brother and I were his world. We spent just about every summer at his house, and he spoiled us completely rotten. Whether we were visiting the Catskill Mountains, attending basketball camp at church, touring Washington, D.C., or just sitting in the back yard working in the garden or greenhouse, we were happy.

My grandfather loved to sit outside and whistle to the birds. He swore to me and my brother that he could talk to both them and the chipmunks—and we absolutely believed he could, though my brother will never admit it now.

Pop-Pop was a stern, old-school Irishman, but he was still the kind of man that would give you the shirt off his back. When it came to children, he was the biggest, softest, teddy bear, and he would do anything for any child—his own children, his grandchildren, and even the children at the Shriners Hospital. No one in our family will forget the day he passed.

Years later, when I was married with two beautiful boys—a two-year-old and an eleven-month-old—I was paying a visit to my mother when she commented nonchalantly:

“I saw the Red Baron today.”

“It’s your grandfather. Whenever I’m going through a particularly tough time, or if I need some answers, I talk to him. Then I see a bright red cardinal. I never see them except when I’ve been talking to him, or when I’m near your kids.”

“Mom, I think you need help!” I laughed. “You may want to lay off the booze for a while.”

About two weeks later, my mom was entertaining my older son at her house while I was putting the baby down for a nap at my own home. Everything was fine in my little world of motherhood—until about thirty minutes later, when baby Connor woke up screaming at the top of his lungs. I rushed to his crib, and when I lifted him up, his little body felt like it was on fire. He also had a strange rash on his entire body. I’m not a paranoid mom (well, maybe a little) but this just seemed so strange to me. Half an hour before, he had been perfectly fine! I called the pediatrician’s office, and they asked me to bring him in immediately.

Frantic, I packed up Connor and put him in his car seat. I called my mother and began to tell her what was going on—then, just as I turned the corner, Connor threw up all over the back seat. I’m talking  The Exorcist type of throw-up. I had no idea what to do. Still on the phone with my mother, I pulled into a nearby gas station, went around and checked on the baby, and tried to clean up what I could.

That’s when I saw what no mother ever wants to see. My little eleven-month-old baby was having a seizure. He was turning bluer and bluer by the second. I didn’t know what to do. Should I call 911 and wait for the ambulance? Or should I drive directly to the emergency room? Connor was already in the car seat; I felt that I could get to the hospital faster than anyone could get to me. My mother agreed.

So I hung up with her, and drove like a bat out of hell towards the hospital. I watched Connor in the baby mirror, and held his hand. Eventually, he started to breathe again, and while I was relieved, I was not relieved enough to slow down. I pulled into the emergency room, and got him out of the car seat.

The seizure seemed to be over, but as I held my baby in my arms, I notice that while he was looking at me with his eyes, the rest of his body seemed lifeless. I learned later that he had absolutely no muscle control—common after a seizure. While sitting in the triage unit with the nurse, I tried to calm Connor, but I could see the fear in his eyes. I struggled to hide my own fear.

Then, all of a sudden, I heard a tapping sound. I glanced up and saw nothing. Again, I heard it: tap, tap, tap, tap. Now the nurse and I were both looking around. “Where on earth is that tapping coming from?” I asked. The noise grew louder, and we turned at the same time to see a bright red cardinal at the base of the window, tapping with his beak.

As soon as we saw him, the tapping stopped. He sat there and looked right at me and Connor.

The nurse turned to me, a look of bewilderment on her face, and said: “You know, I’ve worked here for over a year, and have never seen a bird just tap on a window like that, let alone a cardinal. In fact, I’ve never even seen a cardinal.”

Tears began pouring from my eyes, and I felt a wave of calmness come over me. I looked at Connor and said with certainty, “It’s going to be okay, Monkey.” Then I looked back at the window and said, “Hi, Pop-Pop.” Then the cardinal flew away. Ever since that moment, I have been a believer in angels.

I would like to report that Connor is now almost seven years old, and after five more seizures, a few hospital stays, and some heavy meds, he is doing just fine. He’s smart as a whip, with an extremely high IQ, and a place in the gifted program at school. That kid is going to cure something someday—febrile seizures, hopefully.

I’m sure a cardinal will follow him, wherever he goes.

« Elf on the Shelf for Grandparents
Ice Hockey Parents »