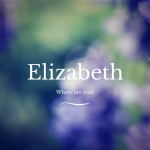 I first met Elizabeth when she walked into my gift shop, introduced herself and plopped in my chair. “My legs are so fat,” she reported. She was eight years old then. She had red curly hair, fair skin with freckles bright blue eyes, and a very large spirit. Her parents were the new owners of a shop next to mine. She became my assistant and spent her days in my store. We became good buddies.

Every Saturday I’d bring her a little gift. I found itsy bitsy CD singles. They hooked onto a keychain. By the end of the summer, she looked like a maintenance man carrying her CD clip on belt loop. I bought her sparkly nail polish, candy, and other fun little gifts.

She decided that we could actually be related because she had the same last name as my cousins. Secondly, Elizabeth was my mom’s name. She was convinced we’d see each other forever at family functions. “We’re family!” she yelled as she hugged my waist.

She invited me to her class for Jeopardy Science Day. I felt like royalty. When I arrived at the classroom, her eyes lit up! She introduced me to all her friends. I was smiling really big; I was having so much fun. One little boy ran to get me a chair and the little girls led me to my seat. Elizabeth was not happy about that. Getting me seated was her job! These little kids were so thoughtful. Then her dad arrived and she asked, “What are you doing here? Anne and I are going for ice cream after the contest.” Her dad grinned at me and sat with the boys. The kids kept peeking at me and whispering. I was sure they were saying, “Elizabeth is so lucky to have her for a friend.”

We went for ice cream cones after the contest and sat at the bench. “I really had fun today. Thanks for inviting me,” I said. She took a few more licks of her double-dip cone and said, “I told them about you.” I thought she meant that she hung out with me at my store and we laughed and had fun. “What did you tell them? I asked curiously.

“I told them that you were a really nice lady and my friend. You suffer from menopause and you can’t remember a thing.” I almost choked. That’s why the little boy ran and got me a chair and the girls led me to my chair. They thought I was disabled!

Elizabeth’s parents told me they were her foster care parents and eventually adopter her. This was no secret. I told Elizabeth I was so happy they adopter her. She said, “Yeah. It was pretty tough in foster care. I didn’t like it. When I first went to my parent’s house, they had two St. Bernard dogs so that made it fun.”

Some of the customer’s came in just to be in the presence of angels. Often there was an emotional connection. It was a safe place and tears were welcome. Often if someone was emotional and told me a touching story, I would get teary-eyed. Elizabeth told me, “You cry more than anyone I ever met.” I told her it’s because I have a tender heart and tears are a good thing.

Elizabeth’s mom asked if I’d have her overnight so she and her husband could go to a concert. “Well, Yes! I’d love to!” I screeched. She arrived with her backpack, computer, music CD bracelet and a stuffed bear. We made cookies, watched a movie, ate popcorn and she taught me new dance moves. Remember I have menopause. I am a slow learner. My teenagers rolled laughing at the sight of us.

Elizabeth was not like my kids. She never broke the rules. My store was conveniently located just fifteen steps to the ice cream shop. At two in the afternoon, I‘d ask, “Want an ice cream cone?” I told her it kept our bones strong. She always had to get permission to have one. My kids would have hidden behind the counter and eaten it without asking. Besides who says no to ice cream? I was in line ordering our cones when she arrived to say, “Mom said I won’t eat my dinner. I can’t have one.” I offered to share mine with her. She stood firm. The answer was no.

In time I had to close the store. After 9/11 sales plummeted and I really dreaded closing it. There was no choice, it had to close. I promised Elizabeth we’d stay in touch. I gave her money to keep in her purse if she ever got stuck, I’d come get her. She giggled and asked, “What if I was in trouble? Would you still come get me?” I poked her in the arm and told her, “Absolutely, I would get you.” She poked me back.

We never did keep in touch. My life got busy and our teens were growing. I drove by her house one day, but it was empty. I was hoping we’d go for ice cream and catch up. No one knew where they moved. Their store had also closed.

How do you lose a little girl? She’d been let down so many times and I let her down again. We moved to Florida and I still tried to find her address to send her a note and a beach t-shirt. I called my old store neighbors hoping someone might know where they moved, but no one knew. It’s been eight years now so she’s sixteen. I wonder what she’s like. I bet she still has that curly red hair and her blue eyes still sparkle. I pray she still has that huge spirit and lights up rooms when she walks in.

If anyone ever meets a girl matching that description, please ask her if she ever had a friend with menopause named Anne. Please ask her to use the coins in her purse to call me. Tell her I love and miss her…..and I won’t lose her again.